It wasn't uncommon though for a clan to have a team that they would try playing in some open league or something. The fact that he said clan instead of team tells me he's been playing cs much longer than you. It was the standard in 1. I think from historical evidence, this is something that Valve doesn't want to get involved in. They would rather let 3rd parties handle this sort of thing. I'm sure they're sitting there envisioning the army of 14 year olds who got into a fight with each other, the team broke up, the team creator won't give control of the team to the other 2 or 3 or 4, and now there are steam support requests flooding into valve to moderate their clan drama.

They just want to make, sell, and fix games. They have no interest in running a pseudo league imo. They're already somewhat involved. You can create steam groups to organize teams, use tags for those steam groups in-game, and even have the name of your team in an MM game change from just "terrorists" or "counter-terrorists" to the name of your team.

All they would be doing is adding additional support for features which already exist. You're right about steam groups, and Valve is already participating in some degree of maintenance when it comes to clans and teams, but I think that the scope of work for them would be different with what we're talking about in this thread. The original poster was talking about features which don't exist with groups, and things which users will likely complain about much harder than clan drama as it relates to steam groups. I'm sure people fight over control or ownership of steam groups, and I'm sure there is Valve support dealing with complaints and claims.

I think that when you attach team ranks, statistics, etc. I just don't think that Valve has an interest in creating and maintaining this.

Steam groups have 0 influence on the game and a completely different purpose. Its just irrelevant to this topic. 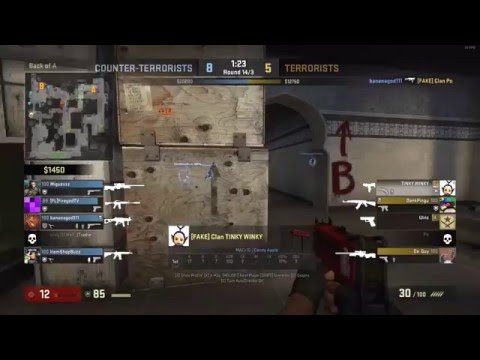 Well then they could just create a new clan. Or just give the option so that if 4 memebers of a clan vote to remove somebody they can, but then put the clan on a cooldown for 7 days.

Plus it will discourage swapping out players but not make it impossible. From historical evidence, Valve was supposed to implement something like this years ago. They literally said they are gonna create a team vs team matchmaking and ladders.

Why the fuck are you getting downvoted? This is literally posted at least once a week and proven to be originally about queuing with friends. If you have 5 active, already ranked players, and you all join a clan that should be just fine, you should be matched against another team of your rank no problem.

The issue here would be, lets say you get 4 ranked players, and 1 unranked or low ranked player who happens to be a smurf,.


If he dominates, it would make sense for him to rank up outside of his clan, but then the issue arises where a team could just carry someone. Don't get me wrong I like the idea, I think there would just be a lot of abuse in terms of rankings if it wasn't super well planned out. The team has a couple of placement matches and then it's all fine. The placement matches should start at the average elo of the teammates in soloq, but then as the placement proceed the team will get a rank that fits the team. You should only be able to have 5 players in a team at any given time.

This works perfectly as long as a team can have only 5 players. With 10 players as OP suggested there can be 5 silvers getting the team in silver rank and then suddenly 5 global elites playing against other teams in silver. Maybe a requirement for new placement if more than 1 player or so is changed in the roster?

So a maximum of like 6 players on the roster and new placement of several players are changed or a player joining with a rank significantly varying from the teams average. I think that best approach might be that team has 5 players and when playing they are allowed to have 1 standin from outside of the team. And some rules for the standin like his rank has to be near teams rank or something to prevent getting a lot better players to boost your teams rank.

Only way to solve this would be to set everyone at one set Elo like buenos had match making currently. This would create a lot of chaos at the beginning but after time it would be goodn. Team-rank wouldn't be based on player ranks. Team-rank would be it's own standalone thing based on the teams performance.

Doesn't matter what rank you have individually as the team-rank is the teams performance. Team of silvers who win could have a MG1 team-rank due to teamplay and winning games although they'd never reach the top simply due to lacking individual skill..

Team of globals could also be MG1 because the just troll and lose, play for themselves. And a team of LE-Supremes could have a global-team-rank because of teamplay, strats and winning even though theres another team of globals who are better individually. Would obviously need some sort of max-player limit 6 players?

One person can cheat and hide it very well; banning 4 players who joined a clan with someone they didn't know that well for 30 days would be ludicrous. I have even que'd with one guy on my friends list who looked totally legit but he was banned. A lot of people like myself would vote kick anyone that are blatantly cheating but at a certain level of play lem it can be very hard to discern between legit play and a cheater who hides it well.


Maybe if you banned them from the clan play system it would work out. I've had a friend banned, and I had no clue that he was cheating, maybe he just downloaded the hack that day, but I don't its fair to punish someone who didn't know the person was hacking. This ain't official but it feels like a gr8 idea but then we have a whole host of other problems. So you have to get 5 people together to play like that, which is good to scrim, but if you NEED 5 and you only have 4 but want a proper practice, sure you can go to normal competetive but people don't have the same mindset, rushing, not being able to rely on strats that will work because you have a 5th that fucks around etc But apart from that it's a great idea to implement.

Can't agree with this, what if you got to know the guy in mm and started to be friends with him while you didn't know he was cheating? You would get punished for nothing. I see what you try to do, punish the cheater and his friends who are getting boosted, but you certainly cant to it this way. I think the first time it happens should be a warning for the player, then increasingly serious punishments as it keeps happening on their account such as 5, 10 or 30 day vac bans. I think it would be better to have just "Tiers" instead of ranks, and for you to start at the bottom tier and have to work your way up.

Add like minded players you meet along your cs journey. Form a regular team to play mm with. Play cs with mates and improve together. Retrieved April 15, Operation Hydra will change things up". Archived from the original on May 24, Retrieved May 24, Archived from the original on April 15, GO brings back Nuke as part of Operation Wildfire". Global Offensive's Inferno Revamped". Global Offensive now has decorative gloves". GO is free in China if you verify your identity".